The recent floods in Chennai were a sure testimony of the Lord’s warning judgement in that place. Many take offense at the thought, but the fact of the matter remains that Chennai had it coming for a long time.
The problem with Chennai is that the government, in order to maximize its state revenue, did not place sufficient restrictions on the building of high rises in and around the Lakes precinct there. Land inspection regulations are easily bypassed and officials bought for a sum, building projects magically get their approval and high rises go up by the dozen with no thought as to the environmental repercussions. 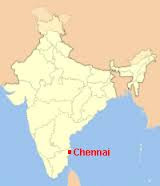 Chennai has always been prone to water logging and hurricane damage due to its geographical positioning in India, right next to the Bay of Bengal in the east.

With all the water pouring in and no place to go, it remains a riddle for Chennai-ites  who crave the crazy fast paced city life and the accompanying fat salary, and would rather wade through knee high streams than relocate. It’s too late to really change the face of Chennai back to what it once was.

Chennai, earlier known as Madras, is the capital of the state of Tamil Nadu. Not only is it the place where Saint Thomas was martyred, and where the gospel first took its roots in India, it was also known as the Jerusalem of Tamil Nadu at one point of time. The state always granted maximum freedom to preach, conduct meetings, and propogate the gospel. Christian liberty here has always been applauded.

Chennai is also where the Voice of God recordings and books are printed and distributed throughout the country from, and where the End Time Message put down its firm roots.

Sadhu Sundar Singh, the well-known Indian evangelist of the early 1900s, who travelled the world, on his visit to the city, rejoiced in the numbers of youth in the city who came forward to dedicate their lives for the Lord’s service.

Today, this Jerusalem has turned into a Babylon, with idol worship and witchcraft in the extreme. It is a den for prosperity preachers who prey on the innocent public with their money laundering schemes. It has bred a dangerous species of self-appointed preachers propagating ridiculous doctrines shaming Christ and mocking the Christian way of life….. Preachers who blow at the audience and separate them as Moses divided the Red Sea (supposedly blowing the Spirit upon them which causes them to fall every which way), preachers who laugh and make their congregation laugh with them saying that it is the joy of the Lord, preachers who tickle the ears of the congregation with sweet words of blessing and prosperity and neglect rebuke and correction….all headquartered in the state’s capital and moving their blasphemous ministries across Tamil Nadu through their centers there. 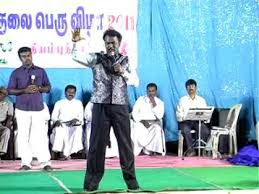 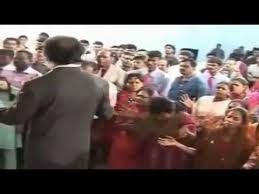 Chennai, just like Mumbai and California, is also Tamil Cinema’s base. In recent days, people in the state have seen a surprising affinity between leading Tamil gospel preachers and cine stars who claim to have been touched by the Lord, but are in truth doing what they do best….acting!

The infiltration of the prosperity gospel and the introduction of strange fires that have corrupted the simple Tamil Christian have not gone unnoticed. Chennai over the years has become a financial base for Tamil television preachers and new up and coming stand-up comic preachers who deceive the simple hearted with their hair brained flares.

The Tamil people are easily trusting, superstitious, and highly respectful to men of God. It is this weakness that the deceiver preys on while leading them astray.

If we look away from the denominational circuit for a moment, towards the end-time message believers again, we can also see the ominous cloud of stumbling that the Branham Christ beliefs have cast in people’s way. HQ: Chennai.

Besides the wickedness of the city, the threat to deceive believers, and these doctrinal stumbling stones, another big reason for the floods there was the persecution that had begun sprouting up and spreading outward across the state. Christian freedom of worship was slowly being strangled, liberties being questioned, few Christians in the surrounding areas being persecuted and killed, the constitutional freedom to propagate one’s own religion in one’s country being swept under the rug.


The floods were sufficient reason to shut down all financial operations per se. Many MNCs are planning to relocate to other cities. And the waves of insanity that had engulfed Christianity here seem for the moment to be put aside. Like a naughty child disobeying its mama’s dozen soft rebukes, Chennai was spanked soundly by its Creator in November 2015. 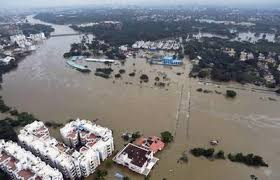 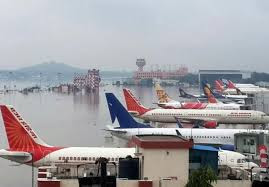 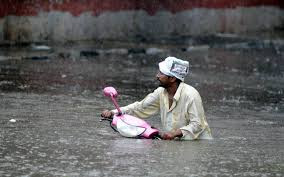 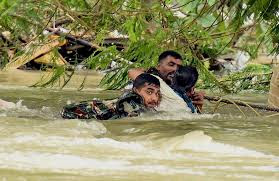 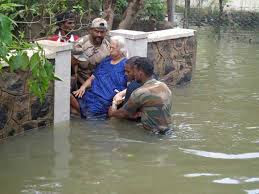 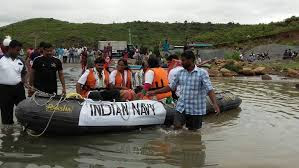 In times like this when the Lord judges, what are we the common man and believers in the judgement of Christ to do? We can obviously not stand aside and cast up our hands, so we tried our best to alleviate the burden for some of our brethren who had been affected there.

This thought had taken root in my mind and began growing each day until I had a conversation with Bro. David Rajan in the US, who is a part of Bro. Richard Gan’s ministry. He spoke to Bro. Gan, and together they agreed to donate an amount for the cause. Besides their contribution, another brother, Bro. Matthew Roy, from Delhi had been gearing support to send relief to Chennai from his side. Since we are a part of each other’s whatsapp groups, his appeal for help on group chat prompted me to relay to him the news that we had already begun planning to send relief to Cuddalore and Chennai.

We then set about co-ordinating our efforts. We had heard that the villages around Chennai needed relief aid as well so the brothers got in touch with the churches in Cuddalore, and we decided to go to Chennai via Cuddalore.

I got in touch with a brother from our church, Bro. Selvam, who is the owner of 2 wholesale provision stores in Pollachi town, near Coimbatore.

He agreed to send 100 sacks of provisions at 0 profit for the amount donated. 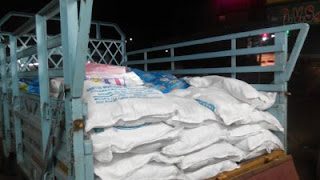 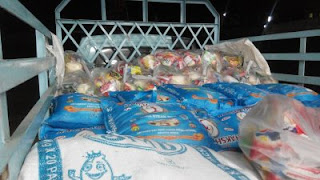 We had already had a clothes collection drive for Bihar. We gathered a few more and packed around 30 sacks (about 4’ X 3’) of new and used clothes in good condition. 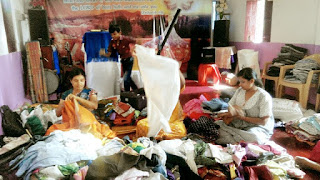 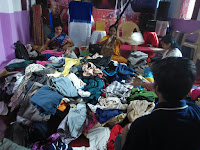 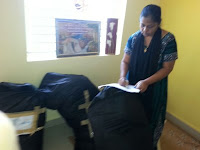 It was my desire to see the consignment reach its destination, having no much faith in the efforts of public relief workers who are usually suppressed by political parties. We had also heard that any relief aid being despatched to the public from other areas was being seized and only released with party stickers. Half of this aid sometimes went missing by the time it reached its final destination.


So, I left Coimbatore on December 14th, along with Bro. John, and Bro. Prakash from our church in Coimbatore by Tempo. We loaded our cargo and put up a tarpoi to keep out the rain. We made the 10 hour long journey by night and reached Cuddalore at dawn. Bro. John is now a senior citizen, but wanted to pitch in, so he and Bro. Prakash made the trip sleeping atop the luggage in the back under the tarpoi (canvas) sheet. 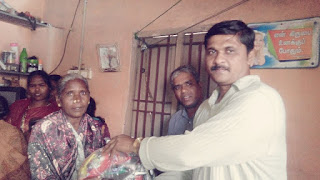 My husband just got word to me that they managed to get a government pass and police escort while entering Cuddalore. They distributed 40 provision sacks in Cuddalore and 60 in Chennai across 5 churches and the general public. The people in Cuddalore were filled with joy and thanked God. Some of the parcels were delivered at believers homes and some at the church where they all congregated.


Pastor Mark, who heads the church there helped in the distribution of the relief parcels and expressed his deep gratitude for the thoughtful effort: "Many of the NGOs and others came forward with bread and tea, and new clothes, but no one thought of what we would be doing in the long run. This idea of provisions is so helpful to us.", he stated. 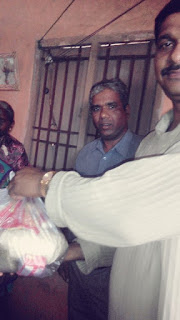 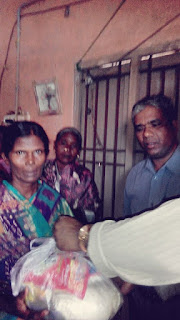 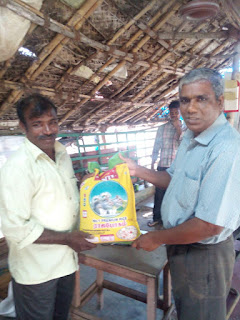 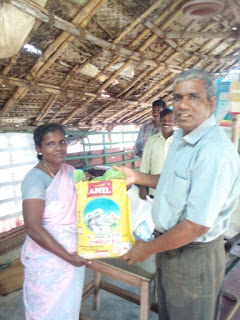 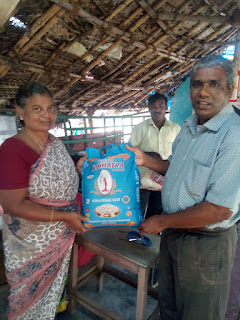 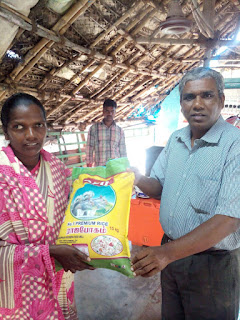 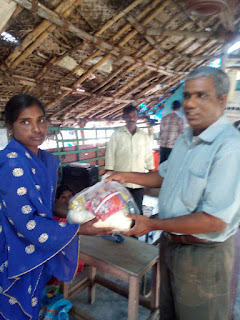 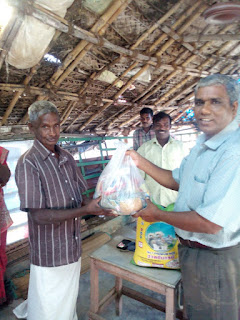 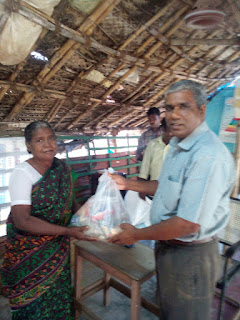 The Chennai deliveries were handed over to the pastors of the local churches. The affected believer families praised God on the streets in Chennai for sending help at such a critical time.

The people’s situation in Chennai was worse than in Cuddalore. One pastor known to us, told us in years how they had been sleeping in their homes when the floods came and they had to struggle to even get out of the door as the water was gushing in, and the electricity had gone out. With no prior warning and no inkling of what was happening, they tried the best they could gather their friends and loved ones close and stay together through it all. 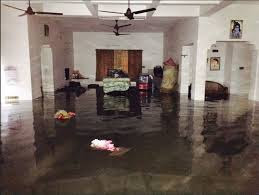 We had invited a couple of families to stay with us in Coimbatore when we heard of the disaster, but they had not even told us the whole picture of how they had suffered or of their current need, thinking that it would be a burden for us.

The parcels were despatched under the care of Pastor Melchi, Pastor Jeevajayam, Evg. Leo, and Pastor Vinodh in Chennai. Pastor Jeevajeyam wrote:


Glory be to God

Thank  you very much for your support and help during this flood situation. We thank God and remember Isaiah:59:1. The provision bags & clothes has been distributed to those who badly affected in Christ and few other religious people with sincere heart.

May our Lord Jesus Christ Bless you abundanly

The affected families have lost all. Their homes will likely require new electrical work, water draining, door and window replacement, etc. People have lost their vehicles, kitchen appliances, furniture, children’s text books, pets, and livestock. As in any natural disaster, they have to start life from scratch once again. 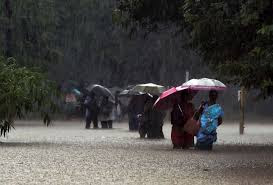 My husband told me that he was not able to control his tears on the streets of Chennai, when people came pleading for help, and once well off middle class families weeping for a sack of groceries.

Their relief van was followed by bike riders pleading to throw down just one sack. The police instructed them to stop nowhere as it would result in a mob riot with starving people beating each other up to get at relief rations.

Whatever we have done seems like just a small dot in this great expanse of need. But we have done it with the love of the Lord, and I believe the Lord will multiply this good.

The government has sadly neglected the common people, instead using relief funds for camps in developed areas, city reestablishment, and clean ups. Many have said that disaster management was very poorly handled with the poor having been completely forgotten. International NGOs have actually done a good job meeting at least the common man’s basic needs at this time, organizing shelters, and providing food and medical aid.

What we have done in giving a little from our side for their monthly provisions and well-being will tide them over at least for one and a half month until some semblance of order returns to the state and they get their monthly wages.

Do remember all the flood survivors in your prayers. 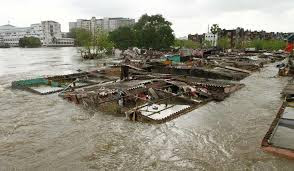 I would like to especially thank Bro. Gan, Bro. David Rajan, Bro. Matthew Roy, and Bro. Selvam for making this endeavor possible through their generous contributions.

I would also like to express my heartfelt gratitude to all those in RLM who have pitched in to help in the logistics of the relief effort, and those of you on Hidden Manna, Hannah's corner (Whatsapp groups) and many from among our close relatives and friends who sent in your offerings. 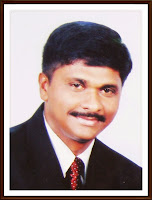 God in the Darkness - A Testimony by Sis. Benita Serrao at